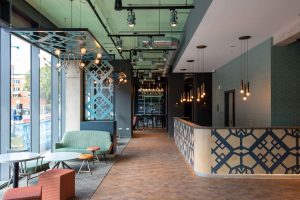 Toybox is a 15 storey, 290 bed student apartment building on the former site of the Nautical Club in central Birmingham.  The structure has a central 15 storey block with two 10 storey wings that comprises a reinforced concrete frame with pre-stressed flat slab construction, one main central shear core in the 15 storey block and two planar walls situated within the 10 storey blocks.

A railway tunnel/ deep cutting located to the south eastern boundary of the site meant that the building structure had to be engineered to transfer loads from its superstructure back into the site away from this tunnel. Our engineering designs therefore included 2 post-tensioned cantilever beams, 1 in the ground and 1 visibly holding up 14 storeys of the building, and piled foundations to support the resulting increased loads in the sub structure.